On Employment and Personal Identity

Multiple teachers, careers advisors and parents often ask children in schools: “What do you want to be when you grow up?” It is a question for which few children can give a sure answer to, however the question is interesting because of its use of language. The question is rarely “How do you want to make a living?” but it specifically asks what the child wants to be. Although perhaps not intentionally, the adults in this situation are asking a child about their future personal identity while stressing their employment as a key part of this identity. However, nobody should be encouraged to make their employment part of their personal identity.

Before diving into this claim, it should be established first what personal identity and employment mean. Questions of personal identity can be asked in many directions. However in this case the definition taken will be: the various aspects that make a person themselves. Put in another way, personal identity is the collection of answers somebody gives when responding to the question: “Who are you?” They are the aspects that are accompanied with feelings of attachment, pride or ownership. They may also be linked to a wilfulness to preserve such aspects. Examples of these answers may be: “I am a happy person”, “I am sporty”, and “I am chunky”; or in a negated form “I am not violent” and “I am never a liar”. When a person has a clear picture in their mind of what these aspects are then it gives that person a sense of integrity and self-consistency. The absence or confusion of these aspects is also known as an ‘identity crisis’, a psychological phenomenon experienced by most people as they develop through the stages of adolescence. Nevertheless the definition of personal identity is incredibly nuanced and can mean various different things to different people, at least in comparison to the definition of employment. Employment is the state of a person being engaged by another on a permanent basis to complete tasks in return for resources. People are described as having employment or being employed. When one makes their employment part of their identity, then when asked “Who are you?” she shall reply “I am a baker” or “I am a lawyer” and have some ownership of this aspect of themselves. With both terms now defined, it may now be seen what arguments can be made against their integration.

Firstly, since employment requires doing tasks for other people, it will always require a person to make compromises which may conflict with other aspects of her personal identity. A key part of employment is that employees are engaged by some others, whether by a single private owner or a collective of shareholders. To put it simply, these others call all the shots. As an employee, a person’s role isn’t to exercise their will freely but to remained aligned with the organization which usually moves to achieve the will of the others. The relationship here between business owners and workers has been recognized for generations and is not anything new. However problems can begin to arise when an employee has made their role part of their identity but are then forced to take an action which feels like a violation of their identity. Take a situation where a person, for the sake of example called Annie, is proud to be a carpenter and considers it a key part of herself. Annie considers part of who she is as: somebody who takes wood and makes beautiful or useful items. She also considers herself a compassionate person towards animals, showing this through work in her free time caring for rescued animals and adopting a vegetarian diet. Given these parts of Annie’s personal identity, lastly consider an order she has to fulfil in her workshop to create animal enclosures for a meat production plant. To add more context, the order is quite critical in allowing the workshop to stay afloat and keep carpenters like Annie employed. She has a family to support and the workshop sees no other customers on the horizon. What choices are available to her? She may resist the order, risking her job in the best case or bankrupting the company in the worst case; this leaves the well-being of herself and her family at risk. Alternatively she may begrudgingly carry out the order and emotionally digest what she sees as an ethical violation. A less extreme example may be to consider a professor working at a university. She considers herself to be a successful academic and also a creator of new knowledge, the second aspect being supported by the first. However over time her work situation changes, requiring more political manoeuvrers within her institution to maintain her position there. Again, to add more context, her field is very specialized and the chances of her obtaining an academic position at another institution is low. In this case our professor may also feel trapped in a forced choice between rescinding her role as an academic or continuing to politically maneuver instead of spending her work time doing what she values, essentially a choice between which aspect of her identity to abandon. Though one may have an opinion over which choices in the examples the actors should take, every choice has a shared property which is a high chance of an identity crisis occurring. When given these tough choices a person like Annie, the professor or any person in this situation may start to seriously question their lives or who they are, causing great emotional stress. The outcome of such a crisis will often be to distance oneself from their employment or ignite a large change in life goals. The former is more common and realistic given the disposition in western society to highly value the desires and goals of individuals, or in simpler words for individuals to value life over work when they come into conflict. So if a distancing from work is in many cases likely, then it may be seen as wise to pre-emptively distance oneself from one’s work in order to avoid the mentioned identity crisis.

An argument against a person distancing herself from her employment is that she will spend a large portion of her life in work, so to consider employment as irrelevant to who she is would be a pessimistic outlook on her life, but this is not necessarily true. It is true that a majority of us will spend a large portion of our lives in employment. Karl Thompson, a sociology blogger, calculates with UK national statistics that over a typical lifespan of 76 years the average adult will spend 23% of their life in paid employment.

Alongside this, there is a popular belief that if a person spends lots of time doing something then that activity should be something valuable to her, however the realism of this ideal varies from person to person based on their own personal situation. The origins of this belief may lie in the tendency treat time as a resource, made most obvious whenever a person talks about “spending time”. While using a resource, it is a common preference to use it efficiently which results in the principle to ‘spend time well’. To use time efficiently in this sense would be for a person to allocate as much time as possible connected to something they find authentically meaningful. However maximising time efficiency in this way is not always the best path for a person to find their life valuable as a whole. For an example, a person named James may find that a valuable use of his time is in social efforts to help recovering heroin addicts. James’ upbringing did not provide him with the privilege to gain many qualifications in this area easily and allow him to connect his values to his employment. So James takes up a day job working in administration at an accounting company while volunteering his free time to pursue his values. In this case, for James to have the most fulfilling life the best option for him is to ‘waste’ lots of his time supporting himself and then using his remaining time connecting to something he values. It may appear as a compromising outcome but the reality is that most people, like James, are to a certain extent bound to some limitations due to their personal history or background. For a person to choose the best option for themselves is not equivalent to being pessimistic. So to view our employment as something remote from ourselves, despite spending a large portion of time on it, is not necessarily a pessimistic outlook on our lives.

One final point addresses how pressures from society can persuade people to make employment part of their identity, discouraging them to form an authentic identity independently. There are multiple examples of how society encourages individuals to consider employment part of their personal identity. Perhaps the largest of these is to be found in the United States as an interpretation of the American dream, which ties into the national identity of the USA. A main theme of the dream is the promise that any person, regardless of background, can gain prosperity to themselves but only in return for full dedication to their work. 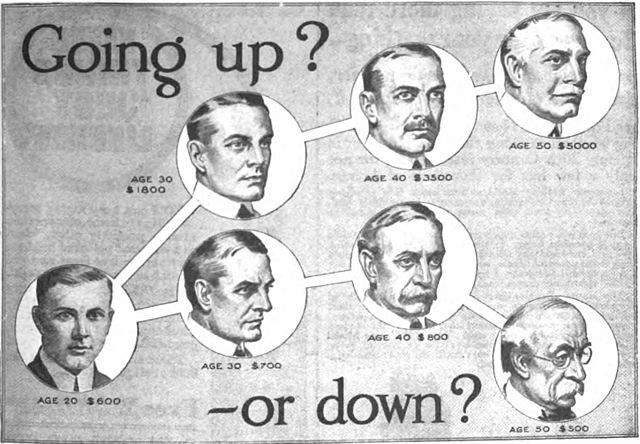 The strong belief and re-interpretation of this principle in American culture culminated in many Americans seeing their employment as a key way to measure themselves within society. It then inevitably became a strongly developed part of the average person’s identity. Other examples of such societal pressures come in the form of propaganda and motivational media. Historically during wars, all countries tend to appeal to people’s emotions to drive up their productivity without expending additional resources. This resulted in much media associating employment with pride and valuable personal characteristics, in many cases even duty. This again caused many to judge themselves based upon their position of employment and therefore see it as a key part of themselves. 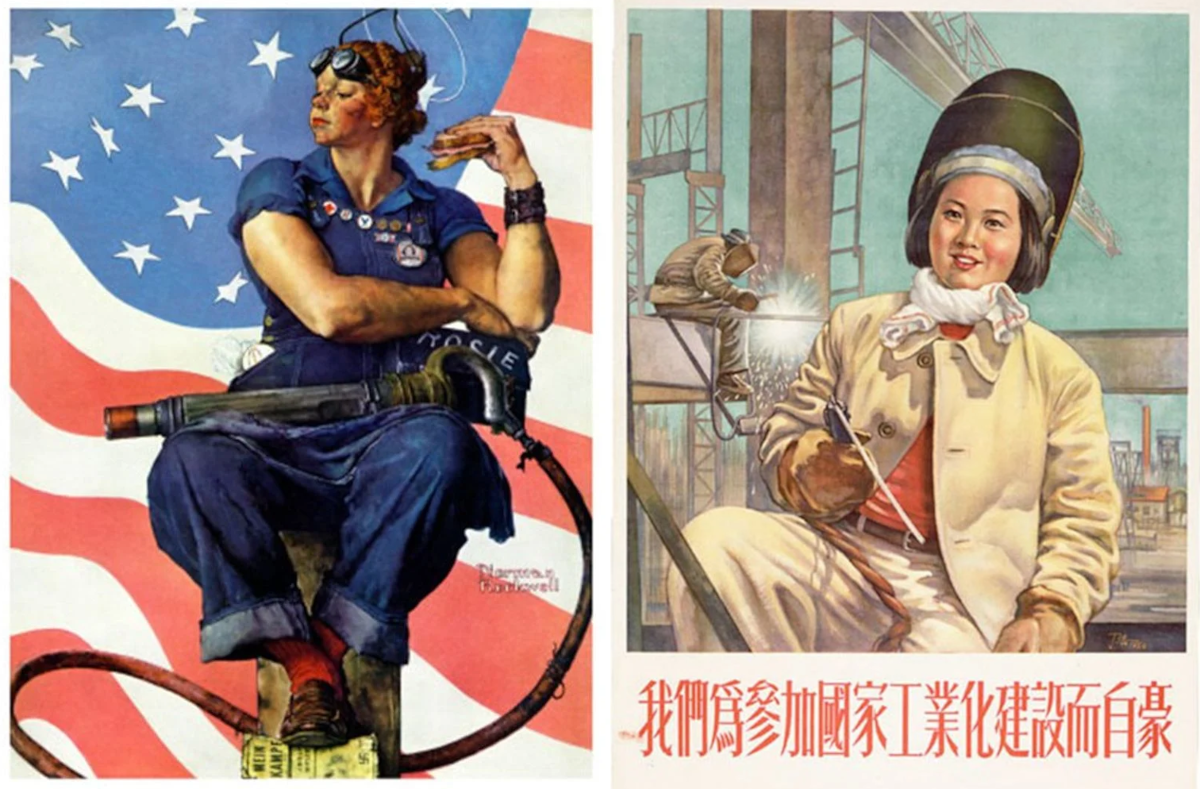 This practice of appealing to a person’s personal identity to improve productivity continues today, although in a reduced form, by states and private companies in the form of motivational media. The main takeaway from these examples is how in each case people are not encouraged to think about who they want to be but are instead told who they should be, which if accepted without critique could cause a person to create an inauthentic identity for themselves. If one believes that a person should have agency and freedom over their lives, then their construction of who they are should also be done with agency and freedom based on values they consciously establish instead of being passively assimilated. So if a person wishes to remain authentic to themselves, they must form their identity based on values they hold instead of appealing to society’s values; this includes values around employment.

In conclusion, a person should not be pressured to consider her employment as an area of her personal identity. Without this pressure, a person may enter employment with well tuned expectations of what they are there for: to earn a means to live. So while asking a child “What do you want to be when you grow up?”, an adult should appreciate that they are re-enforcing this pressure and they should remain mindful of the consequences it can have.